Visiting the Baseball Hall of Fame

Today I visited the National Baseball Hall of Fame in Cooperstown, New York for the first time since my eighth birthday. I don’t remember much about the museum itself from that visit, only that I had a milkshake for the first time ever. I loved them immediately and actually had three that day–two chocolate and one chocolate chocolate-chip. I also remember being surprised and disappointed that there were no fast food chains in town because I was wanting to have lunch at McDonald’s and supper at Wendy’s (how said that I had already been trained to assume that these chains were ubiquitous!). There are still no chain restaurants along Cooperstown’s main strip, which now makes me happy.

The “Jumbo Burger” and chocolate milkshake from the Cooperstown Diner. I got a chocolate shake for old times’ sake even though now I prefer vanilla when drinking one with a meal.

Anyway, it was good to get back to see the artifacts. Both Cooperstown and the Hall itself were packed because it is prime tourist season, and I saw many families with children who looked about the age I was on my first visit. It pleases me that the ritual of visiting is one that continues through the generations. Many people were wearing gear from their favorite teams, which was also neat. It gave the town a central meeting-place kind of vibe; we all had our individual allegiances, but ultimately we have our love of the game to unify us. I was planning to buy a new Mets cap, and was happy to find one for only $9.95 at one of the numerous shops selling sports memorabilia.

There are a number of players that I think deserve to be in the Hall of Fame that are not (Mike Piazza, Pete Rose [even if he did bet on baseball], Craig Biggio, Keith Hernandez…), and visiting did not make me change my mind about any of the players that I just mentioned, but reading through the amazing statistical achievements on the plaques of those who are members did make me feel that the Hall should be more exclusive than I’ve wanted it to be in the past.

Me in front of the Hall. I’m wearing my Keith Hernandez shirt because he should be a member.

Here are some of the photographs I took during my visit, most of them Mets-related:

An old Wrigley’s gum ad. Who knew that chewing Wrigley’s “gives an added firmness–a vigor, to the whole body”? 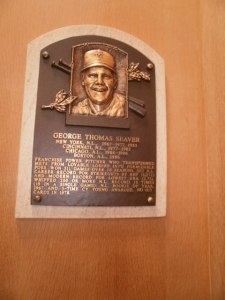 A close-up of Gary Carter’s plaque detailing his importance to the 1986 Mets.

A portrait of Tom Seaver (as a Red, alas) by Andy Warhol. 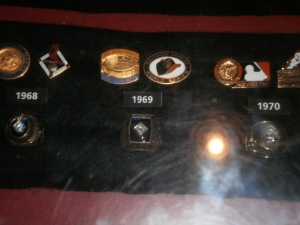 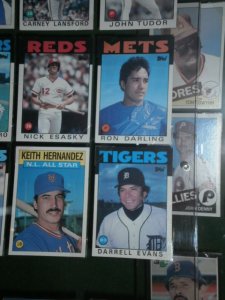 Two members of the Mets current broadcasting team in the baseball card section. 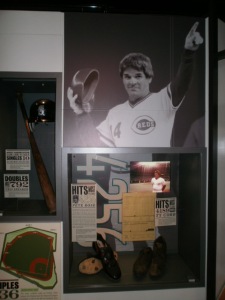