I bought this and Anne Sexton’s book for $1.00 each at Savers Thrift Store in Salt Lake City, whose book section was recommended to me by a student. I already have the current Wesleyan University Press edition of this novel, but I collect different printings of Delany’s work because he is my favorite author and because the older paperbacks are often quite aesthetically pleasing. This one’s spine is slanted a little, but is otherwise in good shape. I got very excited when I found it on the shelf. 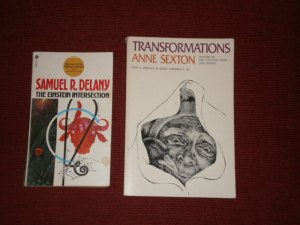 Himes is a twentieth-century African American novelist who is largely ignored by critics because he wrote mostly mysteries, though he wanted to be a “serious” writer. Due to his marginal canonicity I never encountered him in school, and am thus trying to fill a gap in my knowledge by acquiring and reading this book.

Bought on amazon.com. It is a boring new paperback, which is why it does not get a photograph. The vintage copies that amazon had listed were just as expensive as the one I bought, so I decided to buy it new in order to have the current edition just in case I like it so much that I decide to teach it sometime.

This collection includes Sexton’s famous poems about fairytales. I love these poems, and they are usually a hit with students. I will appreciate the opportunity to read them in their original context rather than in an anthology. I haven’t read much poetry this summer, but am excited to get back on the wagon.