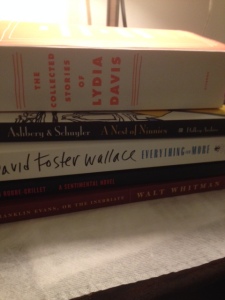 Yesterday I once again visited my favorite place in the world, the Strand Bookstore at 12th and Broadway in Manhattan. I was recently remarking to a friend how when I lived within walking distance of the Strand about a decade ago it always seemed like I would go there and there would be a book specifically waiting for me, whether it was the book that I had gone there to look for in an exquisite edition, or a book that I didn’t know that I was looking for (as I would often go just to browse and see what caught my eye) that grabbed me and was somehow a perfect fit. The past few times I’ve gone to the store this hasn’t happened, and it has been depressing (though, of course, I’ve still enjoyed myself there) as a symbol of how both my relationship to the city and the store itself have changed (the Strand looks fantastic now, but I miss its old, badly lit grittiness before the renovations that were completed seven or eight years ago). But when I went yesterday, it happened again in three instances! It was tremendously exciting.

I eschewed a shopping cart when I entered the store, vowing that I would only buy as much as I could carry in one hand. I am proud that I had enough fortitude to stick to this vow, which is why I only bought five books.

I have been wanting to read this novel for quite a while because I am a big fan of the New York School poets and because I enjoyed Schuyler’s novel What’s for Dinner?, but it is a relatively minor work and thus I have never gotten around to it. But there was a stack of copies on one of the fiction tables at the back of the store on the first floor, and it was priced at only $5.95 new, so I had to have it.

I have never read any of Davis’s work before, but recently read an article about her in the New Yorker that intrigued me, so I decided that I would begin looking for this collection the next time I was in a good (i.e., not Barnes & Noble) bookstore. Of course the Strand had a stack of this aesthetically pleasing volume right at the front of the store!

I have enjoyed the work of Robbe-Grillet’s that I’ve read, so I picked this book up while browsing and was immediately drawn to it by the beginning of its blurb: “In France, Alain Robbe-Grillet’s final novel was sold in shrink-wrap, labeled with a sticker warning that this adult fairy tale might offend certain sensibilities.” Sold! I read it on the train ride home and enjoyed it (on an academic level, you dirty-minded readers) for the most part. It is like a better version of Sade without all of the political diatribes.

I love David Foster Wallace, so I bought this book even though I am not a mathematics enthusiast. I appreciate learning about intellectual history, though, and am therefore hopeful and expectant that Wallace will make this subject fascinating to me. After I read his unfinished novel The Pale King, which is mostly about IRS agents, I was half-tempted to become an accountant, so I am confident that my investment in this volume will not have been in vain.

Whitman, Walt. Franklin Evans or The Inebriate: A Tale of the Times. 1842. Ed. Christopher Castiglia and Glenn Hendler. Durham: Duke UP, 2007.

I love Whitman’s poetry, but have never read this, his only novel, which is supposed to be awful. I’ve been wanting to read it since one of my students did a presentation on it this past year, and when I saw it I knew I had to buy it immediately because I am acquainted with Chris Castiglia! He is a lovely man who teaches at Penn State. It is always exciting to buy a book by someone whom you know. Thus I will enjoy reading it even if the novel itself is terrible.