Some Thoughts on Edgar Allan Poe

Yesterday a friend of mine posted this hilarious cartoon on Facebook: http://i.imgur.com/rlEZr.png. Any time you can combine Edgar Allan Poe and “Bohemian Rhapsody,” you have to do it. I’ve been thinking about the cartoon and chuckling all day, which in turn got me thinking about Poe in general, and how he keeps inserting himself into my life at random intervals. I enjoy his work, though I would not consider him one of my “favorite” authors, but my history with him is longer than my history with any other non-children’s author aside from C.S. Lewis. Here is a brief recounting of some of that history.

My first encounter with Poe was via his famous poem “The Raven.” I don’t remember when I discovered this poem—presumably in school—but I knew it by 1989 when it featured in the first Simpsons Halloween special, with James Earl Jones narrating and the Bart-headed raven saying “eat my shorts” instead of “nevermore.”

The second encounter with Poe which comes to mind is reading a book of his short stories for eighth-grade English. The stories were cool because of their creepiness, but I got a 72 (or maybe a 74? Anyway, pretty abysmal) percent on the exam that covered them, so didn’t revisit the book for years afterward because it was associated with bad memories. However, I still have it, and just now noticed that it is edited by Vincent Price! Classic. And only $4.95 new. 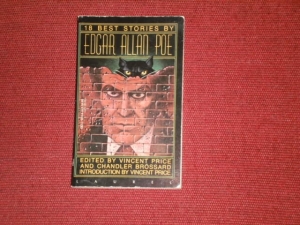 A third strong Poe memory comes from the tail end of my sophomore year of high school. I was in Stratford, Ontario on a school trip to the Stratford Shakespeare Festival (which was a surreal experience, but that is a story for another post). The plays were in the evening, thus we were spending the day browsing Stratford’s shops. I came across a small bookstore and decided to go inside and look for a collection of Poe’s poetry. (Why Poe? Why poetry? I don’t remember my reasons; it was like an unexplainable craving.) This is the earliest instance I can remember of that lovely phenomenon of going into a bookstore wanting a specific book and finding it when you were not sure that you would (Sinclair Lewis’s Main Street and Evelyn Waugh’s Brideshead Revisited are two other examples of this happy synchronicity that I have experienced). In this case, I didn’t even know whether the book I wanted even existed, but there it was, “The Raven” and Other Favorite Poems, for only $1.00. 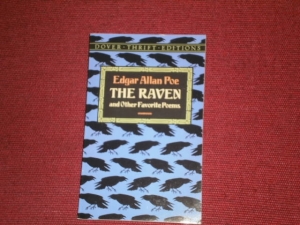 My fourth major Poe memory, and really the last time I thought about him extensively until this weekend (I taught “Annabel Lee” this past semester, but made my students do the thinking about it), is from three or four years ago when I was playing chess with a friend and he observed that in successful attacks the threat of a crushing move is often stronger and more decisive than its actual execution. He compared this to the threat present in “The Purloined Letter,” where the threat of blackmail resulting from the stolen letter is so strong that those who look for it are out of their heads to the point where they miss that it is on the desk, out in the open. I suppose I must add Poe to that ever-increasing mental list of authors that I need to re-read.