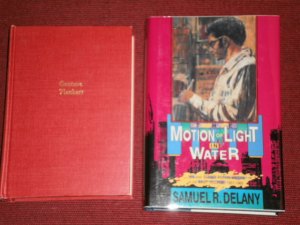 The Works of Flaubert and Samuel R. Delany’s The Motion of Light in Water

I have the revised edition of this book (published by University of Minnesota Press, 2004), but needed a copy of the first edition for an essay I’m writing on the history of public images of Delany’s body (groovy cover, eh?). Also, I’m a Delany addict, and as I’ve written before, I compulsively collect copies of his books. Bought on amazon.com.

I was walking around downtown Salt Lake City today and noticed that a new bookstore, Eborn Books, had moved into the old Sam Weller’s location (N.B. The new Weller’s location at Trolley Square is quite inferior, alas). Eborn’s is still very disorganized as a lot of their inventory is either not on the shelves yet or is not in alphabetical order, but I am very glad that the location will remain a bookstore, and the more independent bookstores, the better. I found a collection of Flaubert’s works in their caddywhompus classics section for only five dollars (in very good condition, too). I have two other volumes from the series, Robert Louis Stevenson’s and Jonathan Swift’s, which were given to me by my elementary school music teacher because he knew that I liked to read (as it happens, Treasure Island was my favorite book as a boy, and I need to find time to re-read it).  I’ve been looking for a copy of Madame Bovary since I read John Irving’s  In One Person several weeks ago, in which the main character is advised to read Flaubert’s classic “when your romantic hopes and desires have crashed, and you believe that your future relationships will have disappointing–even devastating–consequences” (277). This is exactly how I have been feeling lately, thus I am interested to see what wisdom I might glean from the novel.